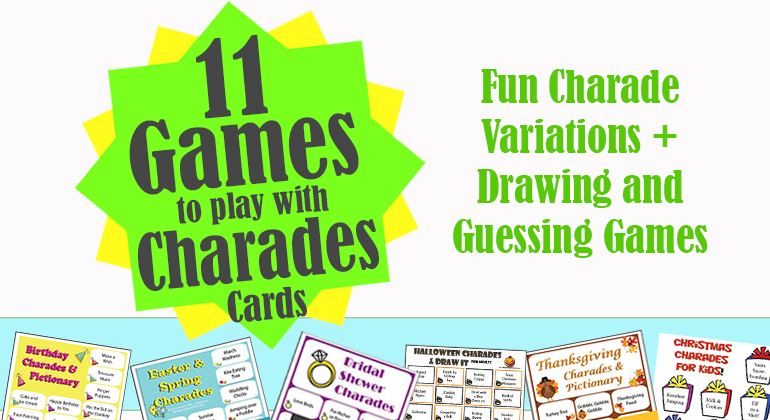 11 Charades and Games to Play with Charades Cards
Charades is one of the most popular party games of all time. It is a favorite dinner party game, game night game and works for a variety of themed holiday parties too. Party Game Ideas offers a variety of printable charade games including Birthday Charades, Summer Charades, Halloween Charades, Christmas Charades and more.

Have you ever wanted to change up your standard charades game or use the charade game cards to play a totally different game with your friends and family? Well you are in luck, because we are going to share 11 games you can play (including charades) with charade cards at your next party.

Two or more teams play against each other by acting out people, places or things. During a team’s turn, one player is selected to pull a charade card from the bowl and then act out the word or phrase in front of their team without saying any words or sounds. Players have 30 or 60 seconds to get their teammates to guess the charades. A correct guess during play earns one point. Then the other team takes their turn.

Play to a pre-determined point total like 10 or play a specific number of rounds like 2 or 3. We like rounds because everybody gets to give the same amount of charades and once the rounds are complete the team with the most points wins.

Small group charades is played like classic charades, but it is individual play instead of team play. This works well if you have 5 or less people. So one player will perform the charade and the first player to correctly guess the charade earns 1 point. Players take turns giving charades. Play to a point total or a set number of rounds.

Game Tip: To make sure one player doesn’t yell out guess after guess after guess. Limit players to one guess per charade. This way they really need to think they know it before guessing. This is really helpful during themed games when some players will yell out “Santa Claus, Elf, Reindeer, Christmas Tree,” before anything is acted out.

Before play begins, paper and pencils/pens are handed out to each player.
Players are informed that someone with perform a charade for 30 or 45 seconds and that once time is up, they must write down what they thought the charade was. Once they have written their answer, the reveal the answer and each person who got the correct answer earns a point.
This can work well for themed charade games and I have known teachers use it to help teach vocabulary lists.

Do 12 – 20 charades and score each round. The person(s) with the highest score wins.

This game is played in teams. You can have two to four teams depending on your group.

Teams take turns going and one player from each team walks up to the charade card bowl and selects a charade. They must then give just “One Clue” about the word or phrase on the charade game card. Their team is allowed one guess per given clue. So the team must talk it over before giving their answer.

If the get it correct on the 1st guess, they earn 4 points. If they get it wrong then another clue is given, and they can try again. A maximum of 3 one word clues can be given during a turn. Once the turn is over the next team goes. Play for a set point total, rounds or set time limit.

Use charades cards to play Draw It or Pictionary, so instead of acting out the cards, you must draw them. Play the same way as charades, where team must guess what their teammate is drawing within the time limit in order to score points.

If you have played Hedbanz before you can pull out the headband to use during the game or you can hold or tape the cards to their forehead. For this game print the charades cards on cardstock so that players can not see what is printed on the cards.

Place the cards face down on the table. When the player takes their turn they select a card and place the charade in the headband or on their forehead.

The player who has the card on their forehead can than ask a Yes or No question to the other players. Questions can be Am I a person?, Am I an animal? and so on. The other players must answer Yes or No.

After each question the player can offer a guess as to what the card says on their head. We recommend that teens and adults are allowed to ask 5 questions and younger kids allowed to ask 8-10 questions.

Play to a set point total or a set number of rounds where the player with the most points wins.
View and learn more about kids and adult Hedbanz games.

This game takes elements of Chubby Bunny and creates a unique games that is all about communication. Use the charades cards as the words that you must get your team to guess within the allotted. Get instruction and rules for Marshmallow Mouth.

You’ll need a bunch of marshmallows for this game as each player on the team will get a turn. During their turn the player tries to get through as many cards as they can during their turn and cannot skip a charade card.

A silly and entertaining game that is normally played with each person taking one turn with marshmallows in their mouth. 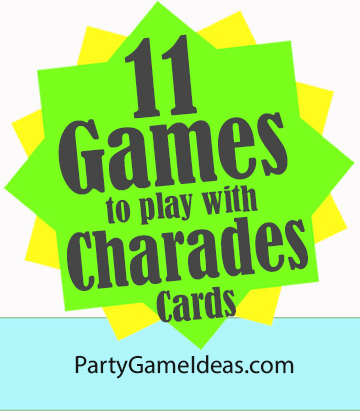 This is another team game that involves placing charade cards against the players forehead. It is like the online phone app game by Ellen.

Each player on the team will get a turn. They will be given 30 to 45 seconds to put cards on their forehead and team members can shout clues so they can guess the word. The player tries to get through as many cards as they can during their turn and cannot skip a charade card. Correct guess equals 1 point.

Complete one or two rounds and the team with the most points wins.

Game Tip: To control yelling and shouting, allow just one clue in between each guess. The best way to control this is to have an item that is passes between teammates, and the person who holds this item is the person that offers the clue. After they give the clue, the pass the item to the next person on the team.

Game Prep – You’ll need to come up with two sets of charade cards. You’ll 3-5 more charades then players. The charades on the cards should be different but of equal difficulty. Examples – Push-up and Jumping Jacks (Exercises), Football, Baseball (Sports), Kicking a Filed Goal, Three Point Shot (More Exact Sport Terms) – Basically you want the same level of difficultly but you don’t want to use the same charades for each team. Place the charades in two separate bowls.

Divide the group into two team of 5 – 10 players each. Set an area for each team to sit an perform their charades. To start the game one player from each team comes up and selects a charade from their team’s bowl. they then return to perform their charade. Once a member of their team correctly guesses the charade the next person from the team goes and selects a charade to perform. Play continues until all players have taken a turn performing a charade and they have been correctly guessed. The first team to this wins.

Note: If a player verbally gives a clue during play they must stop doing that charade and go back to the bowl and grab a new charade.

Telestrations is a fun game where players draw and then guess and draw and guess again and again during one round. If you have ever played Telestrations just use our themed charade cards instead of the regular cards. This way you can have a themed Telestrations around your holidays.

If you never played Telelstrations, you are missing out because it is a great drawing and guessing game that all ages can enjoy. It is the one game that kids and grandparents can play at the same time. It is best played with five or more people. View the game and learn more about Telestrations.

This game is played like regular charades, except players try to get as many charades done during their turn as possible.

Each player on the team is allowed one turn and given 60 – 90 seconds to act out many charades as possible. Players can not skip a charade during their turn. Each correct charade is worth 1 point.

This game is played like regular One Word, except players try to get as many charades cards guessed during their turn as possible.

Each player on the team is allowed one turn and given 60 – 90 seconds to give their teammates one clue about the charade cards that they have and in return their team can make a guess. Once the first charade card is guessed, the player can then move on to the next charade card. The players turn continues until time is up. Players can not skip a charade card during their turn. Each correctly guessed charade card is worth 1 point.

This game is played like regular Draw It – Pictionary, except players try to get as many charade cards correctly guessed done during their turn.

Each player on the team is allowed one turn and given 90 seconds to draw as many charade cards as possible. Players can not skip a charade during their turn. Each correct charade is worth 1 point.

Charades is a great party game that brings people together, but sometimes it can get a little repetitive. Party Game Ideas offers a great assortment of themed charade games and now gives you 11 ways to enjoy charades by acting, drawing, and sharing clues.

As we discover more game ideas for charades, we will add them to this page. We hope you have fun mixing up your game nights, dinner parties and special occasions by playing these party games inspired by the classic game of charades.

Video blog post of 13 Games to play with Charade Cards 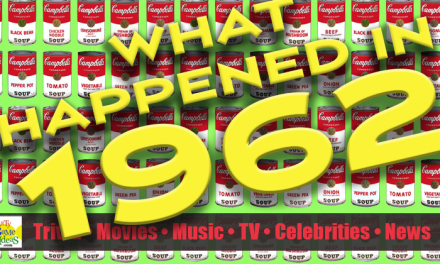 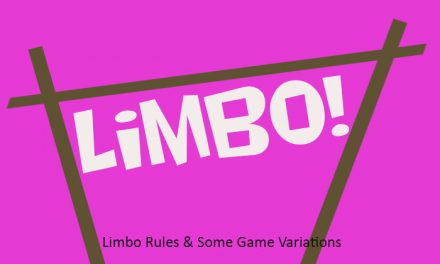 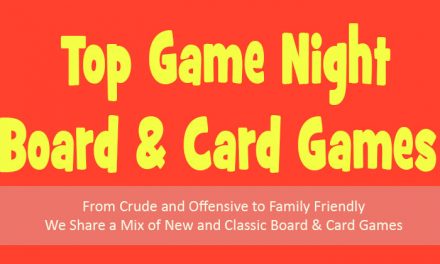