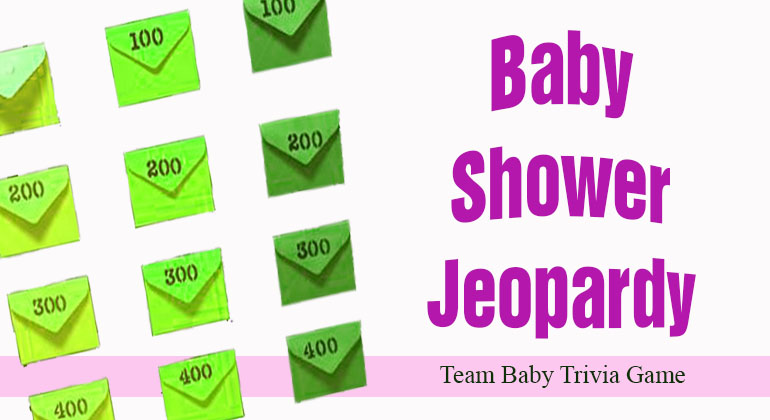 This Baby Shower trivia game will have teams of guests trying to answer questions, in the form of a question. You can pit the men against the women or just divide the group into two or three teams. We have played several this shower game at several events and will provide you with diy Baby Shower Jeopardy game ideas and rules.

Baby Shower Jeopardy Game Prep & Play
a. Get started by writing down 6 – 8 category ideas. We recommend coming up with more than you need just in case 1 or 2 don’t pan out.

Sample Category Ideas
Nursery Rhymes, Who Knows the Mommy / Daddy, Animal Babies, Word Scramble and Baby Food are some ideas to get you started.

b. Now come up with 5 – 6 question answers for each category. Questions in each category should be easy to difficult. We recommend that you write all your question – answers first and once that is complete rank them from 1 to 5 or 6. If it appears that the questions are to easy or hard, revise or add new questions so you have a good mix.

c. Once you have your categories and questions. It is time to make your game board for the baby shower. We found two examples that give you two options. Both involve a cardboard backing, but one uses envelopes which allow you to place the question inside the envelope and the other places the questions on the back of the $ value card, so when a player picks the card the question is taped (or written) on the back. You can decorate the board any way you would like, most people decorate the top with a Baby Shower Jeopardy headline.

Important Step: As you place the question – answer slips into the envelope or on the back of the sheet, note the value of the question on the sheet/slip of paper. This will help you when scoring, which is noted below. 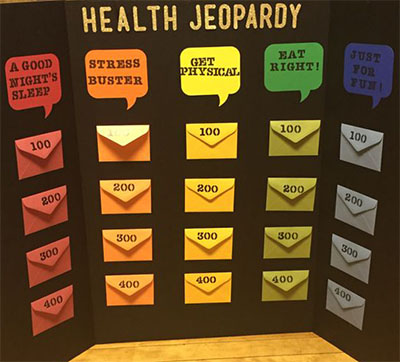 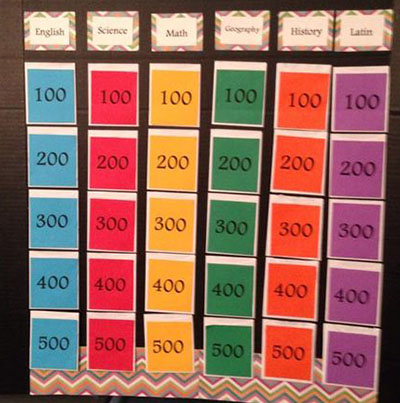 Once your board is set up and you have all the questions on the board. You are almost ready to play Baby Shower Jeopardy.

d. Divide the group into Teams. If it is a co-ed shower, you can do guys vs. gals, divide up couples so they are not on the same team and just randomly make up teams be people counting off. You’ll want either 2 or 3 teams for playing Baby Shower Jeopardy. We like having 3 teams, as it allows more people to play at a time.

f. Instruction the group that you are going to play Baby Shower Jeopardy and have the first players (one from each team) stand at the contestant line. Randomly decide who goes first either roll a die (1 & 4 = Team 1, 2 & 5 = Team 2, 3 & 6 = Team 3), or whoever’s birthday is closest to that day or another method you want to use.

g. Once the first player is decided, they select the category and the dollar value of that question. The Baby Shower Jeopardy Game Host then selects that question from the Board. (We like it when the envelope / sheet is removed from the Board so that users can visually see what questions are left.) The Host then reads the answer. “Jack and Jill went up to find this.”

h. Once the question – answer is read, the first contestant to raise their hand is given the chance to answer.
However it must be in the form of a question. So the response would be “What is water?” If they just answer, “Water,” the answer is not correct and another contestant can answer the question. In no contestant submits an answer within 10 seconds or all submit incorrect answers. The contestant that had chosen the category and question selects again.

Key Game Play Rule: If a contestant raises their hand while the question is being read. The game host stops reading the Baby Shower Jeopardy question and allows the contestant to answer. If they get the answer right continue with the game, if incorrect the host then reads the question in full and those remaining contestants have a chance to answer the question.

Key Game Rule: Contestants are only allowed one guess per turn.

i. Scoring & Having an Assistant
Baby Shower Jeopardy scoring is similar to the tv show. If they contestant gets the answer correct they get the value of the question ($100, $200, etc…) and if them miss the question that dollar amount is subtracted from their score (-$100, -200, etc…) We recommend having a assistant to help keep score during the game as you can have some teams earn points and others lose points during the same round. We recommend creating a simple spreadsheet to help with scoring, or just have the scorekeeper update the scoring after each round.

j. Team Game Play
When playing teams, the player who gets the question correct remains as a playing contestant and the other contestants go to the back of the team line and the next team member in line from those teams become contestants. This is most like the Jeopardy format.

Another Option: Have new players from each team every round, this way no one player dominants the Jeopardy board and everyone can play.

k. Play until all the Baby Shower Jeopardy questions are asked, tally the score and announce the winning team.

Option: You can play a final jeopardy round, but we avoid it because it is difficult to decide who answers it and decides on how many points to risk. in team play, we found it easier to end once the board is cleared. 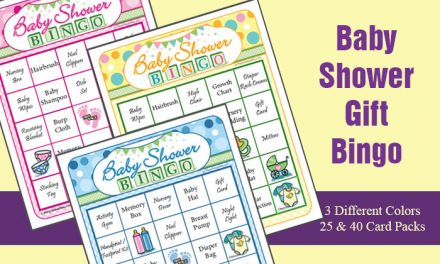 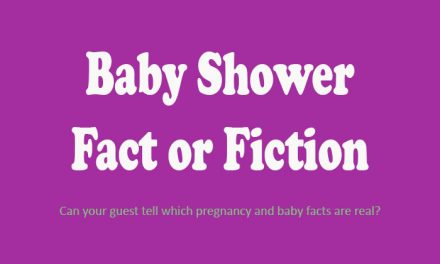 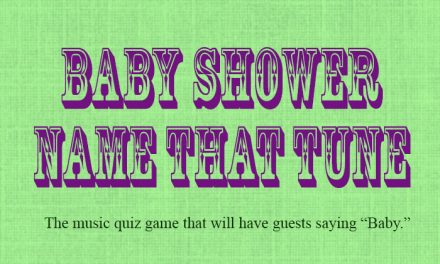